Singer Tracks ready to use

This sample contains 3 songs composed by me not released or published. They are part of an Album, already recorded, with plus 5 songs of mine and 2 on public rights. They were arranged, recorded, mixed and pre-mastered at Toca do Bandido Studios at Rio de Janeiro. I own 40% of phongrams rights. Also represent the other owner who paid for the recording, mix and pre-master job. It shows my ability in composing, and also are available for licensing. In case of licensing I own the open original recordings for a new mix and master, on eventual client demand. 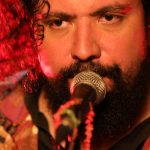