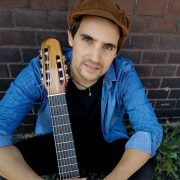 Professor in Guitar and Music

I have over 21 years of experience working as a musician. As a composer, I have won the 1st Prize for Folk Music Work Composition in 2018 in the national contest organized by the National Art Fund (Argentina) and released my first CD last year through the label Acqua Records. Furthermore, I composed the music used by the dance company Potros Malambo fro their show "Pura Sangre", which toured Argentina and Rusia.
As a professor, I specialize in Latinamerican Music for guitar players and have taught in different music schools in Buenos Aires and Tandil.
As a guitar player and arranger, I have worked with renowned Argentinian artists such as Raul LaviĂ©, Nacha Guevara, Marcela Passadore, Adriana Varela, among others. I have also formed musical groups such as with the violinist Karl Espegard, the harmonica player Daniel Chappett and a full quintet named Diego Romero Quinteto (including violin, guitar, piano, bandoneon, and contrabass). I have also composed for all of them.
As a musician, I have played in different venues in Argentina, Rusia, Switzerland, and Norway.