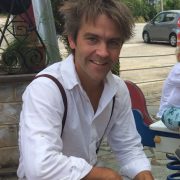 My name is Michiel Hollanders, I am a musician and producer with a wide musical background and education. I live in Greece, and have a mixture of French, Dutch and Baltic ancestry. I have a passion for combining traditional music style elements with modern production, and for getting characteristic sounds in both recording and mixing process.

I have degrees in Classical and Jazz music (guitar), as well as a bachelor and master in Music Production and Applied Composition. After my studies, I delved for many years into various styles of world music, performing and recording Tango, Musette, Balkan Greek music and singer-songwriter styles. I have performed live in various settings throughout Europe, Russia and Australia before deciding to focus more on the production side of things.

My current work ranges from simply recording guitar parts for other people's projects, to completely taking care of production from pre-production until the master, often in international online collaborations where multiple musicians need to be involved and recorded in different locations. This can include writing scores, coaching musicians to improve their parts and performance, fine tuning the sonic side of an arrangement, editing, mixing, being in charge of remote recording sessions, and bringing everything together in a most positive way.

The instruments I use are a couple of special hand built acoustic guitars, a Greek Laouto, some percussion instruments, and some self-built alternative instruments - which actually get requested and used more than anything due to their unique sounds.

My equipment consists of a small but excellent set of hi-end mics, preamps, outboard and a powerful computer.

A fairly recent example of a project I did, which involves my arrangements, instruments and mixing, is the album 'SIX DAYS LOVING' by Tatar artist Zulya Kamalova. The album achieved critical acclaim and got nominated for the Russian World Music Charts in 2019. We got to present the project live in the prestigious Kamal theatre in Kazan in December 2019, as the first ever independent act to ever perform in this theatre.

What can I do for you? First of all, listen to what you have in mind. We can take it from there. I am looking forward to working with you.